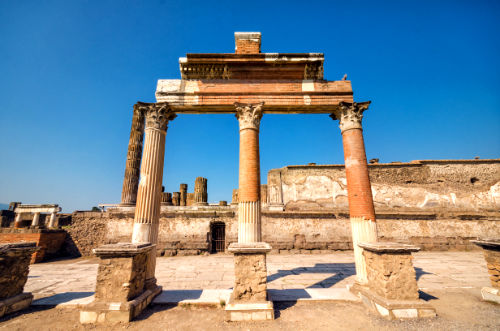 Pompeii (just 16 miles southeast of Naples) is the most-visited archaeological site in the world, due to its many and well-preserved ruins, left behind by a city buried in Vesuvius’s wake in the year 79 A.D. The ancient site was added to the UNESCO World Heritage List in 1997, an excellent repository of details on quotidian life during Antiquity.

Although the Osci Tribe originally founded it, the Romans captured Pompeii during the Peninusla’s Social War, transforming it into a Roman Colony and naming it Cornelia Venera Pompeiana. Partly-destroyed by an earthquake in 62 A.D., the entire city and its splendid suburban villas did not last long enough to see complete reconstruction: Vesuvius not only erupted, but spewed enough lava so as to instantaneously cover the city – which also meant that its buildings (down to the decorations and ornamentation) and its people were immediately fossilized as if they had been placed in a sort of time capsule, remaining in large part intact. 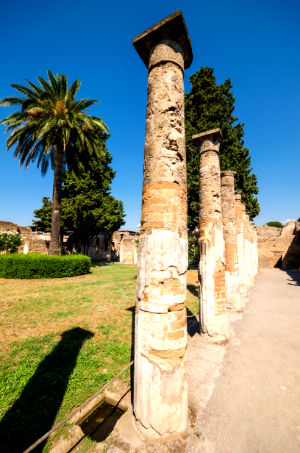 The eventually-recovered bodies, particularly those belonging to “Julius Polybius’s family,” included Polybius himself (this Polybius being a laundry service owner) and a woman fleeing the volcano’s approaching aftermath with her jewelry in tow. These personages ended up serving as their excavators’ key to reconstructing the Pompeiians’ last moments of life.

Amazingly, the inhabitants did not have a clue that they were living in the shadow of a volcano that had been sleeping for over 1,500 years; it is no wonder that they were not able to get away in time (neither did Pliny the Elder, Admiral of the Roman Fleet, while attempting to save them). Pompeii was essentially forgotten for centuries, until the first archaeological explorations in the 18th Century.

Pompeii was a thriving Mediterranean port and a resort enclave for wealthy Romans; if it had not been for the remarkable state in which nature happened to maintain its remains, it might not have come to occupy the place in our imaginations that it does today. We know it for its civic buildings that line its wide streets, and for its domestic ones like the Surgeon’s House, the House of the Faun, the House of the Chaste Lovers and the equally-famous Villa of Mysteries (so-named for the interior murals depicting the initiation rites of the Cult of Dionysus). 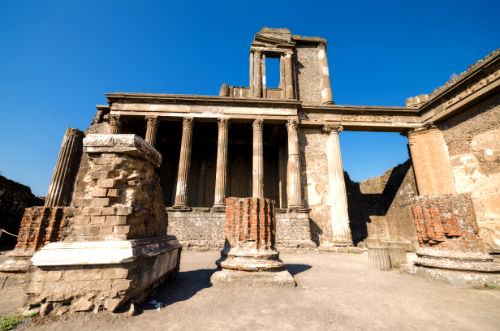 Characteristic graffiti defines the exteriors of many of the buildings here, while refined frescoes narrating daily life are standard interior decor in many of Pompeii’s homes. From them the city’s principal archaeologists have inferred a sense of glamour, luxury, and the appreciation for beauty and art possessed by the ancient Romans that resided here.

Other of Pompeii’s treasures that survived long enough to tell the city’s story are its main forum and public structures, such as the Capitolium, the Basilica, the public baths, the triangular forum, its two theatres and the Stabian Baths.

Pompeii, along with the disappeared towns of Herculaneum and Torre Annunziata (the suburban community of ancient Oplontis) compose a UNESCO World Heritage Site, well-deserved for their ability like no other to recount the life and times of a fascinating bygone society.